Maryland was the first American colony to guarantee settlers the freedom to worship as they saw fit.  In Europe the 1600's were a time of religious intolerance but the Calvert family, themselves converts to Catholicism, made that proviso to settlers in their colony of Maryland.  George Calvert had loyally served King Charles 1, who rewarded him with the hereditary title of Lord Baltimore and a land grant of 10 to 12 million acres "north of the colony of Virginia.”  In 1632 the Calverts honored Charles' wife, Queen Henrietta Maria, by naming the colony Maryland.

According to Worcester County, Maryland's Arcadia by Truitt and LesCallette, freedom of worship in Worcester County is as old as the very first settlement here.  The present day three lower shore counties were originally all one county, that we now refer to as Old Somerset. The first houses of worship were known as meetinghouses and were either Quaker or Presbyterian.  Although Church of England members resided in the area they had not yet established a church building and were meeting in private homes.

It was in 1683 that Colonel William Stevens introduced our Rev. Francis Makemie, who gave the first service on American soil conducted by an ordained minister.  That service was in Colonel Stevens' home located at Rehoboth Towne. Makemie chose that location to build our mother church, the oldest Presbyterian Church in America, known as Old Rehoboth.  This historic meetinghouse was completed in 1706, two years before Makemie's death.

Old Rehoboth pre-dates the two historic Episcopal churches best known to us;  All Hallow's in Snow Hill was completed in 1756, and Historic St Martin's in 1759.  Quakers were outlawed in Virginia and welcomed by Maryland, although I was unable to find a record of any of their meetinghouses still being in existence.

Old Rehoboth is a one-story brick building, finished in the Flemish bond pattern of alternating rows of brick sides and ends.  Wikipedia online encyclopedia describes the interior as having a barrel-vault wooden ceiling, box pews with single raised panel on the ends, and a paneled gallery.  It was listed on the National Register of Historic Places in 1974. 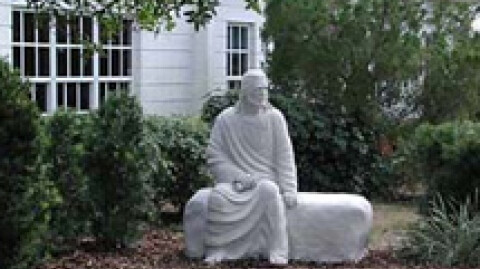